Education is widely regarded as a transformative force in our lives: part of our identity includes what we know about the world. It makes sense then, as we learn more, our view of the world and ourselves changes.

Thesis acknowledgements offer us some interesting glimpses into the emerging identities of the researcher/scholar as HDRs sit poised on the brink of being legitimised by the academy through the award of the higher degree. We don’t really know what will happen next – is there a brilliant career just over the horizon? Will the next phase take us on a new path?

In Australia these short pieces of the thesis are nearly always included in the version of the thesis that is submitted for examination, at the liminal moment of believing that the project is completed, but the outcome is as yet unknown. That is, it is written at a point when the candidate is (generally) hopeful and optimistic about their success in being accepted into the community of scholars.

This part of the thesis is not examinable, yet some form of ‘acknowledgements’ is far and away the most common search term for the DoctoralWriting blog. Since Susan Carter published her post on ‘Writing the acknowledgments: the etiquette of thanking’ in 2013, over 205,000 readers have accessed it, presumably looking for advice on how to present themselves in this piece of research writing. 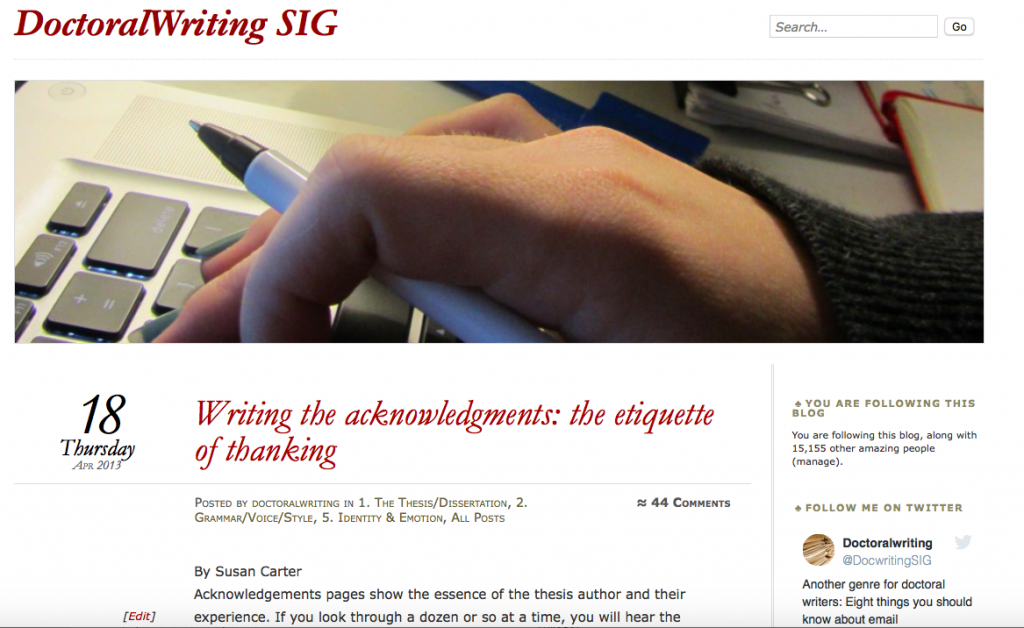 ACTIVITY: Who are the people who helped you find your way on this transformative journey from student to scholar/researcher? Where are the spaces where it happened? What are the institutional structures that supported this emerging identity? Please share your notes via the Comments box at the bottom of the screen.

Despite the very well-established conventions of the genre of the thesis acknowledgements (Hyland, 2004), there’s a surprising amount of wriggle room here to express highly personalised accounts of the self. In some research I undertook on the topic of acknowledgements, it became clear that researcher identities are formed in relation to both people and spaces/places.

We saw that HDRs acknowledged the institutional locations that supported their research, including visits to other universities and research centres, and opportunities to undertake field work. There were quite a few acknowledgements of the intellectual spaces, such as conferences and scientific meetings, where novice researchers could try out their ideas. HDRs also often referred to home and other places of refuge where they felt they had a chance to retreat from the challenges of doctoral studies. For some, of course, ‘home’ is far away in another city or country. 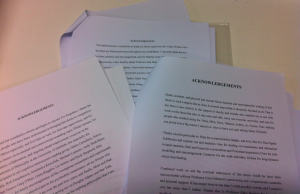 But what is most interesting to me in all of this is that these were entirely populated spaces – it was the people in those spaces that mattered. We see how important community continues to be for forming a researcher identity (Gardner, 2007). As we saw yesterday, taking on an identity is not just something you can decide on all by yourself – there is a crucial role for the community to validate that sense of yourself.

We often think of the PhD as an isolated, individualistic endeavour but studying thesis acknowledgements reveals the importance of sociality to the success of that endeavour (Mantai & Dowling, 2015). This is, of course, partly an effect of the artefact – writing the acknowledgements is the moment for identifying and giving a big shout out to all those who supported the candidate in all sorts of ways. But nevertheless, these little pieces of writing provide surprising insights into researcher identities.

ACTIVITY: Who will read your thesis acknowledgements? And what are they looking for? Make a list of who you would like to acknowledge as helping you complete your thesis.

Please share your thoughts via the Comments box at the bottom of the screen.

Noticing the networks that support you along the way is a valuable part of understanding who you are becoming through this transformative process of becoming a researcher. It might also help you think about how you want to use your research in future – to strengthen and extend those networks, and to get your message out to other networks.